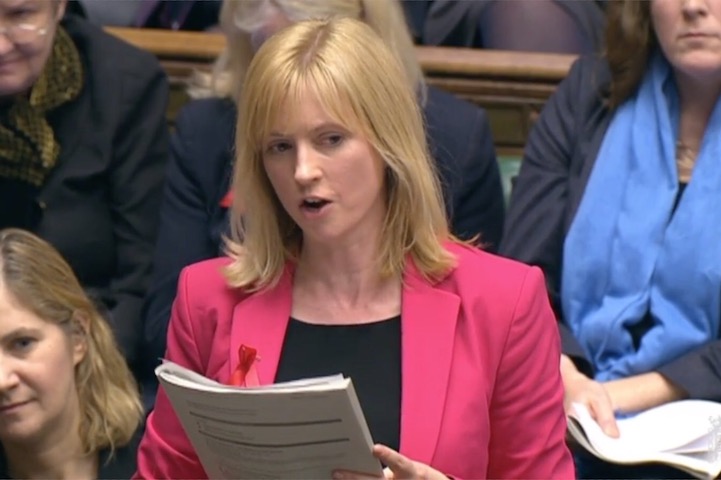 “This time last year, I was an ordinary 50:50 supporter. Frances and the 50:50 team inspired me and made me believe that I too could be an MP. We need more women to be given the confidence and support to succeed in politics, that’s why I’m proud to back 50:50’s #AskHerToStand campaign.”

Rosie Duffield is an English Labour Party politician. She has been the Member of Parliament for Canterbury since the general election in June 2017. The seat was recognised in the Guinness Book of World Records as the longest uninterrupted period of one party holding a Parliamentary seat. Rosie’s election marked the end of a 185-year period of Canterbury always electing Conservative-allied MPs, the longest record in British political history.

For our first edition of 50:50 Voice (subscribe here!) we asked Rosie 10 questions about her experience as a women in politics.

1. What was your first experience of politics / political life?
My first experiences of Politics were attending peaceful protests on animal rights/anti-apartheid demonstrations as a teenager. I was also very aware of the political climate in the 1980s with the News being dominated by Mrs Thatcher, the Falklands War, Miners’ Strike, etc.

2. What inspired you to run as an MP?
I was inspired to run as an MP as I felt that I couldn’t just sit back and watch the political decisions and issues that directly affected me and people like me without getting involved. Frances and 50:50 were a great inspiration and made me see that it was definitely something I should try and pursue further.

4. What is the hardest thing about running for election?
Running for elections can be a bit of a steep learning curve and it’s learning on the job and in front of everyone! For example, hustings events, interviews, media and of course sometimes unpleasant social media. I would advise putting 100% effort in and really trying to enjoy the experience!

5. What is your favourite thing about being a woman in politics? And least favourite?
Being a woman in Politics means I can stand up for ordinary women like me and act on the issues that most affect most ordinary women. After years of campaigning and wishing there was more of a presence for single parents, now there are more of us here! Least favourite must be certain types of trolls on social media and the endless mansplaining at almost every single event I attend – one day I will write a book explaining mansplaining back to men!!

6. What one thing would you change about Parliament to improve access for women?
Make the process of standing for Parliament a bit less traumatic perhaps. It is incredibly demanding and in the lead-up to elections becomes an almost 24 hour, 7 days a week occupation – although that’s very good preparation for the job!

7. Why is it important to have a gender-balanced Parliament?
Because we make up about 52% of the UK population, simple!

8. What has been your proudest moment as a woman in politics?
One of my proudest moments was sitting next to Harriet Harman during her ‘Baby Leave’ debate recently – it really dawned on me that I was sitting in the House of Commons with great women who have changed our lives for the better. Also being promoted to Dawn Butler’s shadow Women & Equalities team – am still grinning about that!!

9. What advice would you give women considering running for office?
Ignore the Imposter Syndrome – that is inevitable!! Ignore the trolls because sadly so are they. Please just do it!

10. Which woman do you most admire?
So many – but someone who stands out now is Mary Beard. She is outstanding in her professional field; I love her style, her wit, her brain and the fact she doesn’t give a flying spotted-squirrel about what other people think.