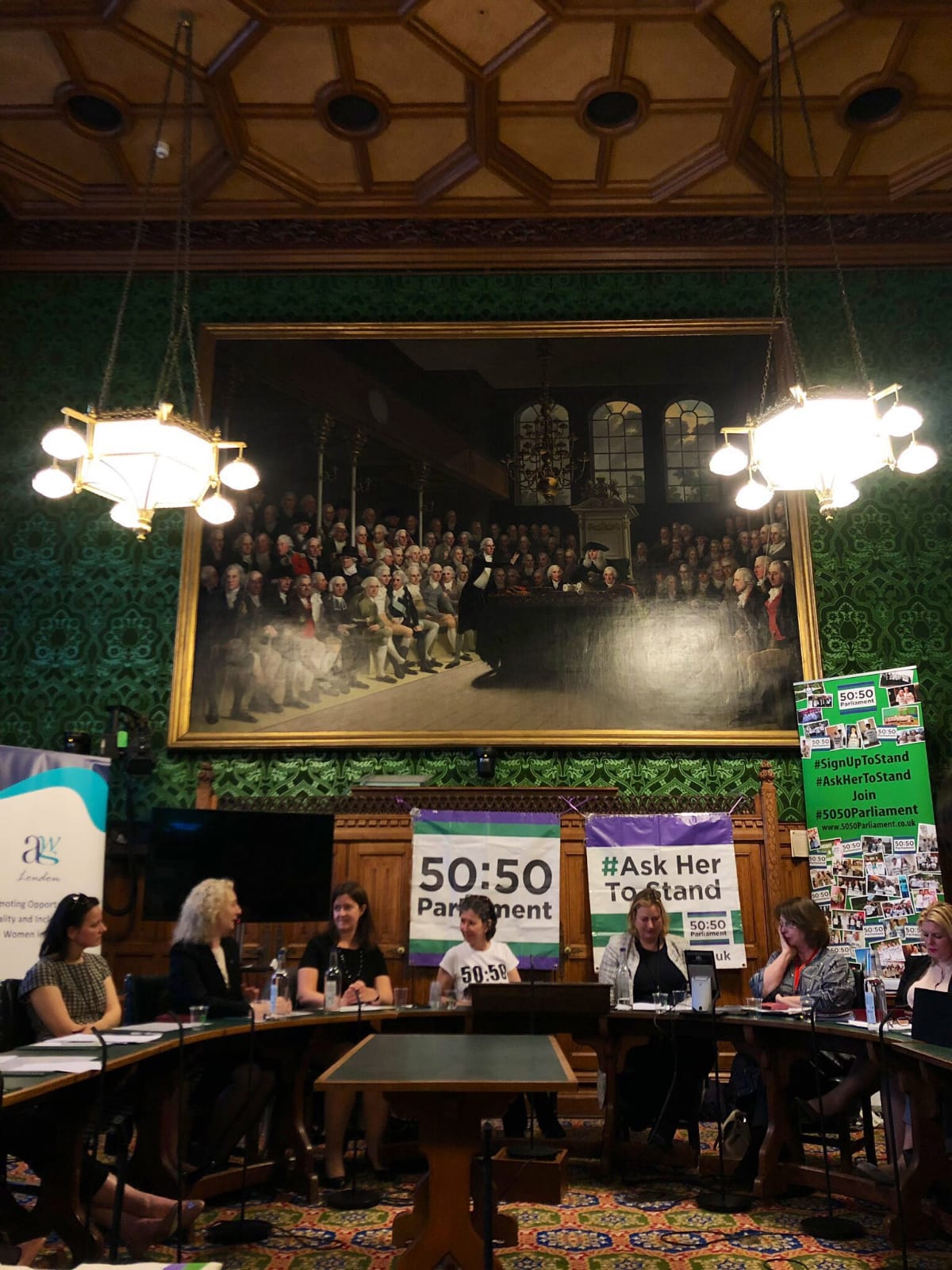 Last week Elaine O’Connor from the Association of Women Solicitors London and Frances Scott from 50:50 Parliament hosted a joint event at Parliament. By Sarah Tomlin

Monday night in Parliament and every seat was taken in committee room six. Sitting below paintings of all-white and all-male politicians, a room full of mostly women chatted excitedly in celebration of one hundred years of women in the law. Tonight’s draw: an inspiring panel of eminent women lawyers, judges and MPs

This year is the centenary of the Sex Disqualification (Removal) Act of 1919 that allowed women to become jurors, lawyers and magistrates for the first time. Part of the national yearlong celebrations include the First 100 Years Project led by Dana Denis-Smith, former lawyer and CEO of Spark21.

Joining them from the House of Commons were Mims Davies MP, Wera Hobhouse MP, Sarah Jones MP and Antoinette Sandbach MP, herself a former barrister. In addition, Baroness Glenys Thornton joined the panel from the House of Lords.

The women were keen to discuss the impact that women lawyers and legislators make in writing and implementing the law. But the first question to the panel was about the barriers that keep women from entering the law profession or choosing a career in politics in the first place.

A desire to make a difference

“The judiciary should reflect society but at the moment there are too few women,” commented Justice Clare Moulder. Today there are less than 25% women in the senior judiciary, while the House of Commons has 32% female MPs.

Mims Davies, the MP for Eastleigh, who calls herself an accidental politician remarked: “Going into politics is like going into Narnia,” adding, “I don’t think politics now is always about law making. You have to be a social worker, and you need to understand people and issues.”  Wera Hobhouse, MP for Bath, agreed: “You don’t need expertise to be here, just a desire to make a difference.”

And yet, “Perception is a big barrier,” says Antoinette Sandbach, MP for EddisburySandbach. When Sandbach was first asked to stand she was in her mid-30s and it took her another ten years to get here. She was first an MP in the Welsh assembly, which already has 50:50 male:female participation. So she suggests “Become SMP or London assembly member before going for MP role. It can be a good stepping stone into parliament.”

Sandbach was keen to be honest about the challenges facing women in politics. “It is difficult to balance family and working life,” she says. But there are solutions. You need supportive partners or families, and as a single mother Sandbach chose boarding school for her only daughter, which she found more affordable than a full-time caregiver.

Unlike private law firms, however, the Parliamentary holidays closely follow the school holidays. And as an MP, says Mims Davies, “You do control your own diary”: if you want to attend the school play or sports day, usually you can.

Social media is a big barrier for some. As a former barrister Sandbach has a simple solution: “I will prosecute anyone who makes death threats.” She also turns the noise off by using mute button on Twitter: “Very often they are keyboard warriors and won’t say to your face what they say online.”

How do women make a difference?

Justice Amanda Yip spoke about the importance of judicial impartiality: “Gender should not affect judgements.” But she added, “They can play a role in how things are presented. When you have more women in the room people talk in a different way, even introducing a more lighthearted manner.”

Wera Hobhouse MP agreed: there is a problem with recruiting women into politics because it is seen as combative. “Women are put off by aggressive and bullshit culture.” Parliament needs to change the tone. “Confrontational politics is not as good as consensus politics.”

Sandbach believes you need a critical mass of 30% women to get change. Today the FTSE 100 has a record 29% women on their boards.  And laws have been made that require gender pay gap reporting, which is helping to change the discussion across some industries.

But progress needs to made in all professions: including the partnerships common among law firms and accounting firms. There are plenty of female lawyers but still very few become partners in the top firms. Politicians like Sandbach are pushing to introduce gender pay reporting to partnerships.

One question from the audience concerned unconscious bias training. It worked for the partners at her law firm, would it work for gatekeepers elsewhere? Why not political selection committees?

Another question from the audience asked about making politics more open: can we demystify the process?

Certainly all the parties have women support networks and organisations (see party resources page here) and there are always opportunities for mentoring or internships. The Patchwork Foundation is aimed at getting young people, especially those from disadvantaged and minority communities, involved in politics. And The First 100 Years project aims to inspire future generations of women to enter the law profession.

The next 100 years will be more female.

The Association of Women Solicitors London aims to promote opportunity and inclusion for women working in the law. They have been established for many years and are well-recognised by all the major government and regulatory bodies. AWSL liaise with the Solicitors’ Regulation Authority, the Judicial Appointments’ Commission, and The Law Society regarding issues affecting women solicitors and provide a completely independent voice.

Inspiring, supporting and encouraging women on the path to Parliament with our #AskHerToStand and #SignUpToStand programmes. Join at www.5050Parliament.co.uk