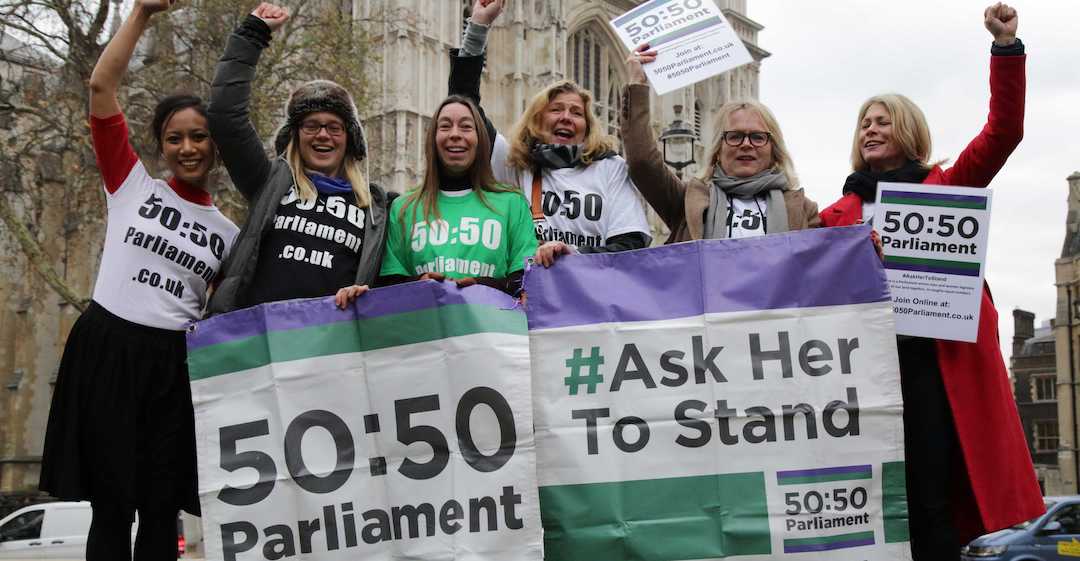 100 years ago on 28 Nov 1918 Nancy Astor was announced as winner in the Plymouth by-election. She had been asked to stand by a petition from women in the constituency and became the first woman to take a seat in the Commons. But there is still much work to do for women to gain equal seats and equal say. On 28 Nov 2019 young women from Plymouth High School For Girls will march with 50:50 Parliament, loud and proud in the campaign t-shirts, at the unveiling of the Nancy Astor statue. We call upon everyone to inspire women along the path to Parliament by supporting 50:50’s #AskHerToStand campaign!

“It is great to have more statues of women but we still need more women writing statutes! Nancy Astor led the way, breaking through the Parliamentary portcullis but there is still much more to be done to ensure that our democracy is truly inclusive and representative of women. Men continue to dominate the corridors of power, outnumbering women by 2:1 in the Commons. On the basis of the 2017 election, when only 12 extra women gained seats, it will take 50 years for their to be gender balance on the green benches. It was the women of Plymouth that asked Nancy Astor to stand. Now everyone can ask a woman who would make a good MP to stand via 50:50 so we can support her along the path to Parliament. Thank you to the young women from Plymouth High School marching for 50:50 on 28 Nov 2019 to help raise awareness of our inspirational #AskHerToStand campaign. Let’s build a better democracy together!”

In the 100 years since Nancy Astor took her seat over 5000 MPs have been elected but fewer than 500 have been women. In those early days Arthur Balfour, Lloyd George and many others had made it clear that they would rather have a rattlesnake in Parliament. Winston Churchill said “We hoped to freeze you out.” Women continue to be abused in political life, with many leaving Westminster ahead of this election.

This is why 50:50 launched their #AskHerToStand programme in 2016. 50:50 work across the political spectrum, taking positive action to inspire, encourage and support women to stand for elected office. Over 900 women have gone on to #SignUpToStand with 50:50. Now 50:50’s new girls network, a system of 50:50 buddies, mentors and monitors women’s progress to elected office. 50:50’s inspirational programmes are making a difference. Detailed analysis of election data shows that there are 170 more women candidates standing compared to in 2017. Many candidates standing in this election have been inspired by 50:50.

Shana Roberts, Liberal Democrat Candidate:
“I had the privilege to take part in the Ask Her To Stand Day in Parliament last November. This amazing event showed me that I was not alone in wanting to change our political system. 50:50 Parliament gave me hope for our future. Now I am standing in this General Election”

Olga FitzRoy, Labour Candidate Croydon South:
“My interest in politics was always as a spectator, I thought it was something other people did. After attending an inspiring cross-party event by 50:50 parliament I started to believe that maybe it was something I could put myself forward for. 18 months later I’m standing for Labour as the parliamentary candidate for Croydon South”

Sara Kamur, Conservative Candidate for West Ham:
“50:50 Parliament inspired me do it! After deciding to stand as a PPC over a year ago, I haven’t looked back. #AskHerToStand was the motto that stuck in my head for ages. Definitely made me get on with it and apply.”

Why do we need more women MPs?

In national and local politics only one in three politicians is a woman. We want Westminster to draw upon the widest possible pool of experience and talent, including that of the 32 million women who live and work in the UK. Diversity leads to better decision making and representation shapes policy. A gender balanced legislature would be better informed, more resilient and responsive. We need the best of both, men and women, working together in equal numbers, running the country and planning the future together. Gender equality is a human right, Parliament is meant to be a representative institution and most people are women.

Research has shown that women are considerably less likely to consider standing for election than men and need to be asked three times or more before they consider it seriously. It should be normal for women to consider standing for election. Although we have a long way to go, 50:50 Parliament is celebrating record numbers of women candidates, looks forward to welcoming all female MPs elected next month and will continue to work hard to increase the number of women selected and elected in future.

50:50 Parliament works across the political spectrum in taking action to improve the gender balance in the UK Parliament. With their #AskHerToStand and #SignUpToStand campaigns 50:50 inspire, encourage and support women on the way to Westminster. Over 900 women have signed up to stand via the 50:50 website and a team of volunteers are now mentoring and monitoring these women’s progress to Parliament. 50:50 have been called the new girl’s network, together, they aim to build a better democracy. You can join 50:50 Parliament at www.5050parliament.co.uk and nominate yourself or a woman you know for their mentoring program.