The fight for political equality is still on – #AskHerToStand #SignUpToStand #5050Parliament

2018 was a fantastic Suffrage Centenary year with numerous celebrations to mark some women winning the right to vote. So how far have we come in the last hundred years?

Our view at 50:50 Parliament is that the UK should be leading the way for women’s political equality!

50:50 have been called modern day Suffragettes. We are a cross-party, non-partisan campaign with a clear aspiration: better gender balance at Westminster. We are putting pressure on Parliament and the political parties and we are taking action with our #AskHerToStand and #SignUpToStand programmes to inspire, support and encourage women along the path to elected office. 50:50 recognise that some women face multiple hurdles and will need more support to gain fair representation.

Parliament is currently in disarray over Brexit. Although the Prime Minister is a woman it is still mainly men at Westminster who are working their way through this problem. Research showed that the debate in the lead up to the Brexit referendum lacked women’s voices. Analysis by Loughborough University revealed that men dominated 85% of press coverage and 75% of TV time. Women accounted for 29% of MPs but they had less than 16% of parliamentary press and media coverage. Even in 2018 women are not heard!

On 21 November 50:50 organised a massive #AskHerToStand day at Westminster. This was to celebrate the centenary of the passing of the Qualification of Women Act which allowed women to stand for the first time ever. On that day 50:50 was loud and proud in the heart of Parliament calling for “equal seats and equal say” (see ITV News and other press coverage).  Many MPs have shown support for our cause (see our “Get Inspired” page) with both  Amber Rudd and Harriet Harman amongst others, championing 50:50 and #AskHerToStand that day.

Over 300 women from all over the UK came to Westminster at the invitation of over 200 MPs. It was an inspirational event and in the weeks that have followed hundreds of women have gone on to #SignUpToStand through www.5050Parliament.co.uk bringing the total number this year to around 400. Our volunteers are a “new girls network” who are  now helping these women take the next step along the path to Parliament, introducing them to the right people in parties and other supportive organisations. We will monitor their progress in the expectation that some of these talented women will be selected for winnable seats. We only need 116 extra women to be elected to the Commons to have equal seats. From a population of 32 million equality in the Commons is not a big ask. 325  women sitting on the green benches would amount to one women in every 100,000 having a seat in Parliament.

There is some evidence that women need to be asked three times before they will consider standing and are half as likely to consider a career in politics but our #AskHerToStand campaign works. Rosie Duffield was a 50:50 supporter who we inspired to stand and against all the odds she went on to win her seat in the 2017 election.

Since the 50:50 petition was launched in 2013 and our evidence to the Women and Equalities Select committee was submitted in 2016, it seems that Parliament might be listening. Two reports have been commissioned which provide a blue print for the changes that need to be made: the Improving Parliament and The Good Parliament Report. The political parties have also responded: Labour have stated that they want to achieve a 50:50 gender balance amongst their MPs at the next election, the Conservatives  are aiming for 50:50 candidate shortlists, the SNP put gender balance at the heart of government and the Lib Dems have adopted all women shortlists for some seats.

So as we approach the end of this Suffrage Centenary it seems that Westminster does want to welcome women.

Why does this matter?

50:50 want the best. We want a Parliament that draws upon the widest possible pool of talent and experience, including that of the 32 million UK women who account for over 51% of the population. We want the best of both, men and women running the country and planning the future together. Diversity leads to better decision making so 50:50 want women to be able to contribute equally to all the big decisions that our country will face in the years to come. In future, Brexit will be done and dusted but there will be other major decisions in which women should participate equally such as: climate change, foreign policy, defence spending, health and welfare budgets, education and parenting policy.

Representation shapes policy. When asked why there was tax on tampons President Obama said “because men were making the laws when those taxes were passed” and this is the tip of the iceberg. It was women MPs that campaigned for women to have equal pay and more recently pay transparency. There are numerous issues where women’s experience is needed to shape policy and legislation properly.

Women make a massive contribution to the country with their paid and unpaid work. Their experience counts and our political and Parliamentary systems should be equally accessible.

On 14 December 1918, just a few weeks after the Armistice,  women could participate in democracy for the first time ever. After nearly a hundred years of campaigning they could at last vote and stand in the general election. The “progressive” legislation that allowed this was passed at the end of the first world war, a war in which women’s voices had played no part. It took another ten years before women over 21 could vote, on the same basis as men.

As in 1918, maybe political turmoil will once again lead to radical change. Perhaps Brexit will be a catalyst for citizens and politicians to reflect on the nature of our democracy. For many, now is the time, not just to rebuild the facades of the buildings at Westminster, but also for us to consider the fabric of our democratic systems and assess their inclusivity and accessibility. Surely, we are ready for the diverse majority of the population that are women to have equal seats and equal say in Parliament. Sometimes upheaval leads to renewal.

So, if you know a woman who would make a good MP go to our website and #AskHerToStand, if you are a woman who might consider a career in politics at some point #SignUpToStand via 50:50, we are here to help women get elected and monitor their progress along the path to Parliament. Join 50:50 Parliament today, let’s build a better democracy together. It would be a great legacy, 100 years after the Suffragettes won their victories! 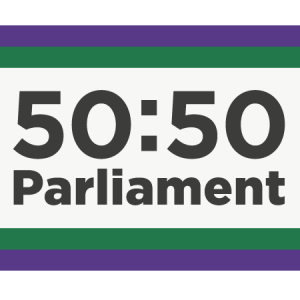