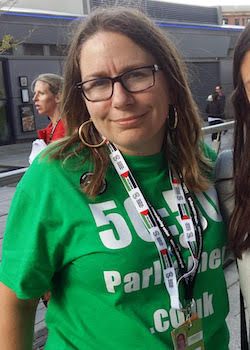 “Women are not interested politics Kelly, that’s why I voted against it.”

So said a member of my CLP, when explaining why he voted against a motion for an All Women’s Shortlist (AWS).  This comment was no surprise to me. Years as a political activist have shown me time and time again that, for many, the idea that women do not belong in politics persists. The failure to bring about gender equality in any part of our political system is used by some as proof women are not interested in or not ‘cut out’ for politics.

Of course, the truth is that, 101 years on from some women gaining the vote the infrastructures of our political systems continue to conspire to exclude women.

Stuck in the past

When the first women entered Parliament, beginning with Nancy Astor in 1919, the Palace of Westminster was not designed for women at all.

It may seem trivial but the only women’s toilet was a quarter of a mile from the debating chamber and a small staff room in the basement, known as ‘the dungeon’, was designated The Lady’s Members Room.  Women were expected to use this as an office, changing room and everything else. Meanwhile men had access to baths, dining rooms and a smoking room.

Things have largely continued in the same vein – with women expected to adapt to the political system, as it is, with little thought given to how it could change to incorporate the realities of women’ lives.

This, surely, is one main reason why women remain so underrepresented in all layers of government.

Take maternity: in 1976 Labour MP Helene Hayman became the first sitting MP to give birth. When her son was 10 days old she asked the Conservative Whip if she could be paired in order to miss a vote, and received a negative response.

Labour Whips refused her the time off so she came, baby in tow, forced to breastfeed her child in the only suitable place, which happened to be Shirley Williams office. A senior Conservative called the police when she left the baby with his nanny in the Ladies Members room while she voted.

And so things continued like this until last year, when Liberal Democrat MP Jo Swinson was ‘furious’ after Conservative MP Brandon Lewis, who she was paired with, voted in a Brexit vote while she was on maternity leave.

This led to Labour MP Tulip Siddiq delaying a planned caesarean, in case the same thing happened to her.  The outcry over this led to a temporary standing order being introduced to allow new parents to vote by proxy, with Tulip making history when fellow Labour MP Vicky Foxcroft voted on her behalf in January.

In 2010 a nursery was put in the Palace of Westminster.  Predictably complaints followed – about the loss of the bar, about the ‘waste of money’ and, of course, that this was a ‘perk for women.’ The numerous bars which adorn the building are apparently not a perk worthy of comment.

Does it need to be stated in 2019 that the changeable nature of Parliamentary debates, with urgent votes and the like, make planning childcare incredibly difficult? This true for Parliamentary staff as well as MPs, and a nursery helps.

Last week Parliament debated making the place more family friendly and accessible.  MP Ellie Reeves said “If Parliament is to be truly representative of those we seek to serve, we must continue to look at ways to break down barriers for those who might consider putting themselves forward for public office.”

Why have we not done this already?

This week MP Stella Creasy announced her pregnancy.  At the same time she bravely told of her experiences of suffering miscarriages and having to continue with her work as an MP while bleeding and in pain. MPs from all parties have spoken in support of her campaign for maternity leave for MPs – on the same terms as their staff.

The Independent Parliamentary Standards Authority (Ipsa) regulates the pay of MPs and authorises the budgets they claim for their work. It does not “recognise” that MPs may go on maternity leave and so bears no responsibility to make provision for any paid cover for what they do outside the parliamentary chamber like campaigns and constituency casework.

In Denmark a member of the national parliament would have a substitute MP appointed.  Stella said she felt “forced to choose between being a mum and an MP.”

How many great people are we missing out on because Parliament does not account for the simple fact women have babies?  Why is all the responsibility on the mother, rather than on the structure which is oppressive in penalising parents who wish to serve?

Then there are local councils, where women and people under 60 continue to be poorly represented, which is a shame because councils should be representative of all groups within the community.

Being a councillor and a mum is difficult: late meetings, casework, reports to read, but I love it. Representing my community is what I always wanted and I am sure there are many other women like me who dare not put themselves forward because the systems are not in place to support them.

I could not have dreamt of standing for council when my children (now ages 12 and 9) were younger as I could not possibly have attended committee meetings within days of their births, or managed bath time routines around late meetings or canvassed while breastfeeding.

I know that when my children were under five I knew much more about local provisions for preschoolers, what was available and what was missing than I do now. That’s not to say I don’t try to be an effective voice for mums battling with services I no longer use, as I will for anyone, but there is no doubt that councils benefit from people with a broad range of experiences – at the moment that is rare.

It may surprise people to learn that there is no expectation of time off from council work for anyone who has recently given birth. Only around 5% of councils have baby-leave policies.

I’ve heard female councillors being told they must attend meetings within weeks of giving birth and feeling shamed for not “pulling their weight.” This is not good for them, and frankly it is not good for our society.  Until we act to change things we will continue to exclude people from standing and will not get the representation we need.

Petition for Maternity Leave for MPs