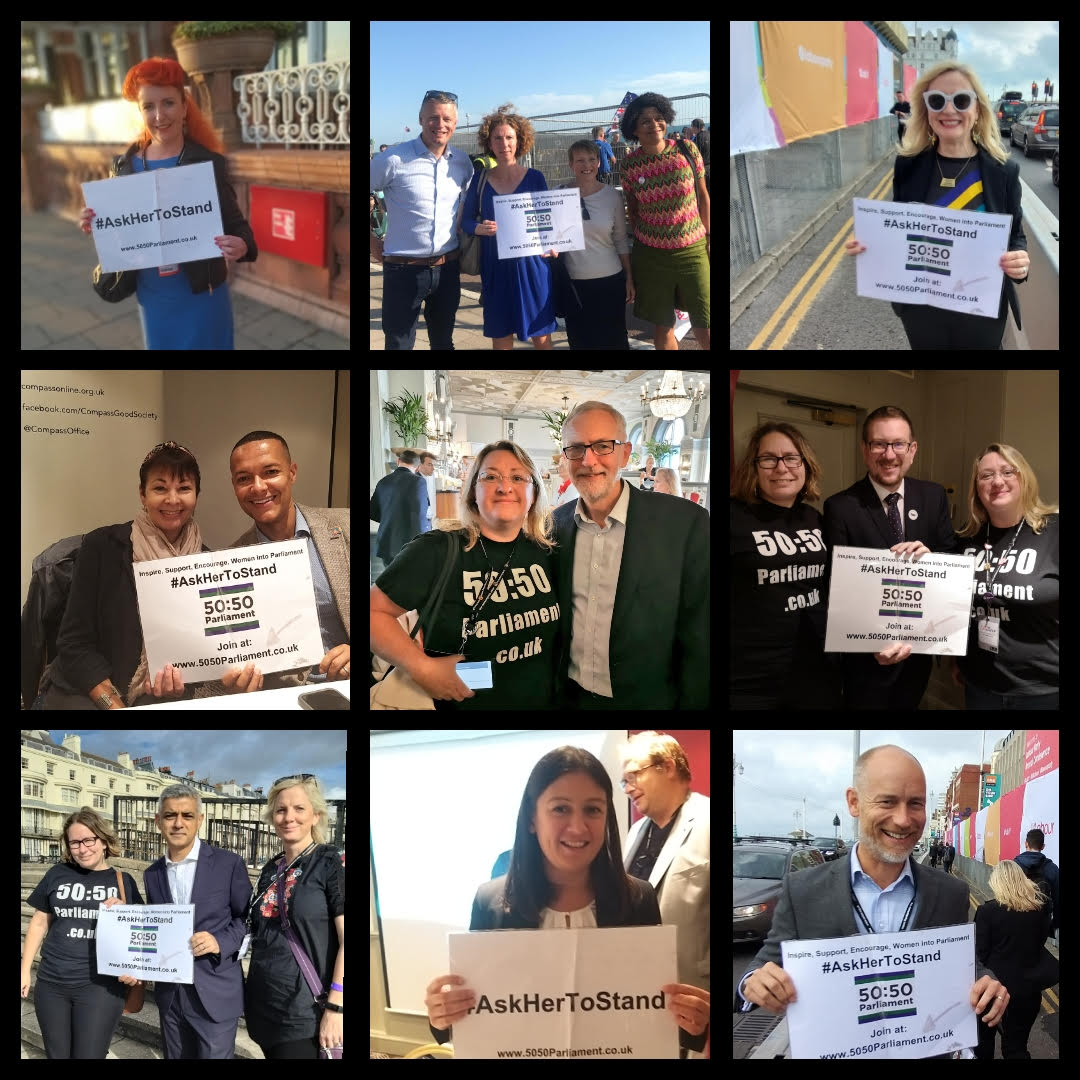 I am back from Brighton and the 2019 Labour Party conference. In my first year here as 50:50 Parliament #AskHerToStand Director.  Here are the highlights.

The first success I want to comment on is the election of Abena Oppong-Asare to the Chair of Labour Women’s Network.  Full disclosure: Abena is a friend and a constant source of support and encouragement to me. Abena is the first woman from a BAME community to take the role, and takes over from Olivia Bailey, who was the first openly gay woman to be Chair.

The significance of this cannot be underestimated, and shows that women in the party want more understanding and recognition of intersectionality. Having said that, it would be wrong to suggest that the appointments of Olivia or Abena are tokenistic in any way. Both women are spoken about by women from all backgrounds and parts of the party as inspirational.

In truth, their advancements are evidence of how, in a well run organisation like LWN, which seeks to remove barriers and empower women, the best people are able to get the positions they deserve and everyone benefits.

LWN ran a campaign this year called #DownWithManels, seeking to stop panels at conference with only male participants.  The campaign received a boost on Monday when Plymouth MP Luke Pollard pulled out of a panel at the last minute after finding out there was no woman sitting on it.

Luke demonstrated what is needed for progress to occur for women in the Party, and that is for men to be allies! I hope others in the party will follow Luke’s lead and refuse to be on all male panels from now on.

There is a feeling shared by many that the party has benefitted from greater female representation.  Not a single MP I spoke to was against the goals of the 50:50 campaign. Yet there is disappointment at the way All Women Shortlists have been used in some selections, especially the failure for one to be applied in Vauxhall where the current MP, Kate Hoey, is standing down.

What is also undeniable is the power of women supporting women.  I noticed at various events, and afterwards on social media, how many women are keen to celebrate their friend’s successes in the party and at Conference, and that this sisterhood keeps many women in the party active within it.

Although the Labour Party does have more female MPs than all the other parties it is clear there are still hurdles to be knocked down.  Jacqui Smith chaired an excellent LWN panel about Abuse Of Women In Public Life which revealed that the rise in online abuse is putting women off from standing.

Councillor Cathy Cordiner-Achenbach spoke about being assaulted on the doorstep and I was encouraged by her comment that we should all seek to ensure that we do not lower ourselves to use derogatory language about other women, whatever their politics.

Fabian Women’s Network held an event on local government called ‘Where Are The Women?’. The panelists reflected on the things that had stopped them from standing and their experiences as female councillors.  All commented on how they needed to be persuaded again and again that they had the right skills before they actually stood.

On the panel was Jessie Joe Jacobs, who is running to be Mayor of Teesside.  If successful she will be the first female Metro Mayor. I was very impressed by her.  She told the familiar story, of having to be persuaded to stand.

The FWN’s also launched the new edition of their guide for aspiring female councillors: ‘Stand Up and Be Counted: Be A Councillor.’ (More disclosure, I feature in it too).  There is a lot of great work being done by women in all levels of the party and we must celebrate it.

For me, the Conference confirmed what I have long since discovered, a sisterhood is the best thing a woman in politics can have. Find women who will support you and support others.  Together we can change the world!