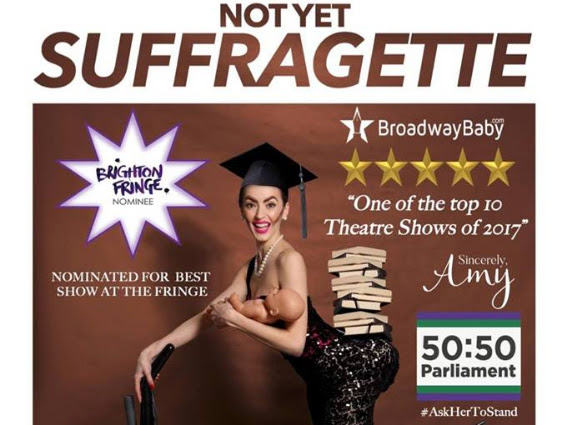 Not Yet Suffragette is a one woman feminist theatre and comedy show written and performed by the talented Natalie Ann Cutler.  One hundred years on from some women winning the right to vote the continued lack of equality it laughable.

Not Yet Suffragette is funny, feisty and feminine!

The story begins during WWI where women kept the country afloat while men were away at war. Natalie firstly plays the role of Flora Sandes, the only British woman officially to serve as a soldier in WWI. Even after women finally won the vote in 1918, she raises the question “What has really changed over the course of 100 years?” Many decades it seems have been spent in the kitchen.

In the roaring twenties, hemlines and haircuts got shorter, showing some form of liberalisation, but as early as 1921, the FA banned women from playing football, which was only lifted in 1971.

We then head to the 1930’s where in the show Natalie reads out actual articles from The Telegraph on how to keep your husband happy. She then speeds through WWII,  when again women helped with the war effort, only to be shunted back into the domestic sphere by 1950’s. 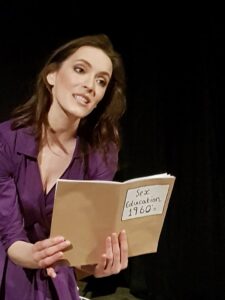 Another real extract is read out, this time from a 1960’s sex education pamphlet on how a woman should obey her husband in the bedroom, as detailed in her marriage vows.

A century on, men for the majority of industries, have the top jobs. Women are still demonised for breastfeeding in public and women are hounded across the world for wanting the right to an education. The gender pay gap is also covered. It was women politicians that fought hard for legislation concerning equal pay but with only 1% of UK businesses having to disclose their figures this month, it really is a reminder that there’s still plenty for women to fight for.

Natalie speaks starkly about El Salvador too – the country’s abortion law prevents women from accessing abortion under any circumstances. Women are behind bars for being victims of rape or incest, sentenced for 40 years in prison for suffering miscarriages and stillbirths.

And then we get to tampon tax. This is where the show gets even funnier, when it’s pointed out how ridiculous it is that tampons are seen as a luxurious item, while kid’s clothes aren’t taxed. 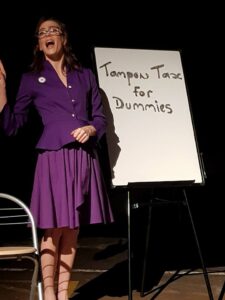 Apart from Natalie’s Instagram makeup and styling school which had the audience in fits of giggles, this show is worth coming to. It makes you realise how blatantly obvious sexism is. And just as importantly, it makes you realise that in 2018, there’s still plenty of actions we can take towards equality. One of which is to join 50:50 Parliament  (it cost’s nothing to register support). Even BBC World News got in on the act, covering #NotYetSuffragette , #5050Parliament and their #AskHerToStand campaign:

50:50 have been called the Modern Day Suffragettes campaigning for political equality. At Westminster, in the corridors of power, men still outnumber women by more than 2:1. Parliament is meant to be a representative institution and should draw upon the widest possible pool of talent and experience, including the UKs 32 million women. As “Not Yet Suffragette” demonstrates the reason this matters is because representation shapes policy. It’s about time that women had an equal say in how the country is run and planning our future.

At the last general election only 12 extra women were elected, at this rate it will take over 50 years to have gender balance in the Commons. That is too long to wait, there is too much at stake, which is why 50:50 have launched their Ask Her To Stand  campaign. If you know a woman who would make a good MP then Ask Her To Stand via 50:50 here and they will encourage her and support her along the pathway to Parliament. We only need ONE in 100,000 women to be at Westminster for equality of representation – so let’s help them get there. As the old Suffragette saying goes “Deeds not Words”. So take action; for equal seats and equal say, join 50:50 today and be a modern Suffragette!

See other reviews of this fab comedy on Broadway Baby and Sincerely,Amy.