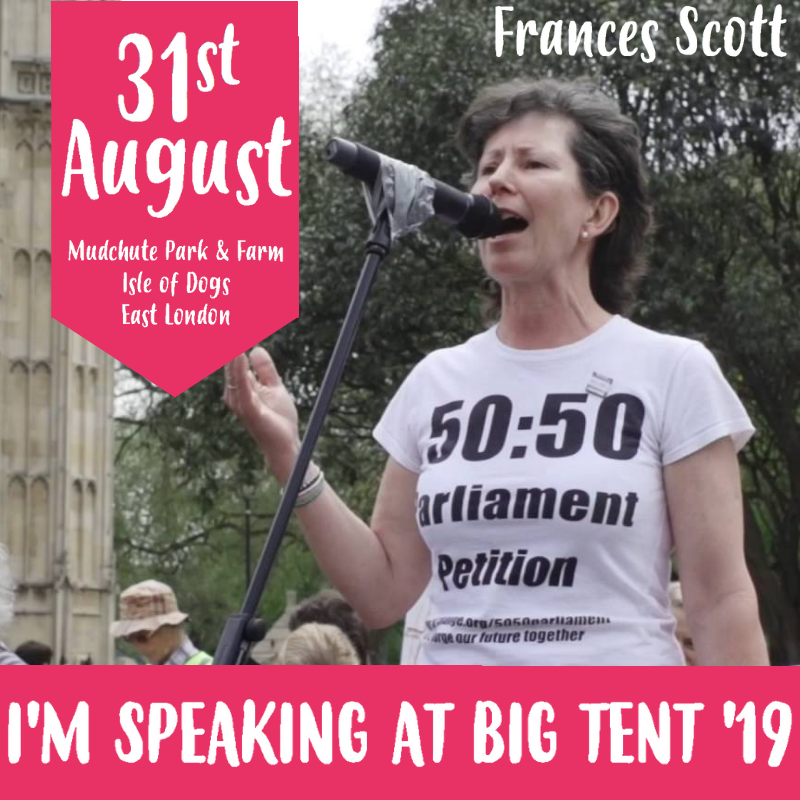 In a truly representative democracy women would have equal seats and equal say!

Thanks Big Tent Festival for leading the way by ensuring proper 50:50 representation of speakers.

Right now Brexit dominates political discussion and is generating a lot of talk about democracy.

It is a massively important issue that will affect everyone’s future and will certainly be on everyone’s mind at the Big Tent Ideas Festival this Saturday.

However, research showed that the debate in the lead up to the Brexit referendum lacked women’s voices. Analysis by Loughborough University revealed that men dominated 85% of press coverage and 75% of TV time. Although 29% of MPs were women they had less than 16% of parliamentary press and media coverage. During this important debate women’s voices were not heard.

Men continue to dominate the corridors of power and direct the course our country will take. They outnumber women by more than 2:1 in Parliament. Since 1918, when women first won the right to stand, of the 5000 MPs elected fewer than 500 have been women. Only twelve extra women won seats in 2017, at this rate it will take over 50 years to achieve gender balance at Westminster. More than 40 countries already have better gender balance in their governments.

Our view at 50:50 Parliament is that the UK should be leading the way for women’s democratic inclusion and parliamentary equality!

The mother of Parliaments needs modernising. Sometimes upheaval leads to renewal. Surely, we are ready for the majority of the population that are women to have equal seats and equal say.

It took a world war for women to win the right to vote but one hundred years on women are still fighting for political equality.  As in 1918, maybe political turmoil will lead to radical change. Perhaps Brexit will be a catalyst for citizens and politicians to reflect on the nature of our democracy. For many, now is the time, not just to rebuild the facades of the buildings at Westminster, but also to consider the fabric of our democratic systems and ensure that they are inclusive, accessible and truly representative.

50:50 have been called modern day Suffragettes. We are a cross-party, non-partisan campaign with a clear aspiration: better gender balance at Westminster. We are putting pressure on Parliament and the political parties and we are taking action with our #AskHerToStand and #SignUpToStand programmes to inspire, support and encourage women along the path to elected office. 50:50 recognise that some women face multiple hurdles and will need more support to gain fair representation. There is evidence that women need to be asked three times before they will consider standing and are half as likely to consider a career in politics and our #AskHerToStand campaign works. Rosie Duffield is a 50:50 supporter who we inspired to stand and against all the odds she went on to win her seat in the 2017 election.

50:50 is a partner organisation at the Big Tent Festival this Saturday 31 August at Mudchute Farm. Big Tent has ensured that they have same number of men and women contributing to the discussions and debates on the day. Like 50:50 Parliament they have been taking action by asking women to speak!

Why does this matter?

50:50 and Big Tent want the best. We want political debates and decision making that draws upon the widest possible pool of talent and experience, including that of the 32 million UK women who account for over 51% of the population. We want the best of both, men and women working together to decide policy and run the country, planning the future together.

Diversity leads to better decision making so 50:50 want women to be able to contribute equally to all the big decisions that our country will face. In future, Brexit will be done and dusted but there will be other major decisions in which women need to participate equally such as: climate change, foreign policy, defence spending, health and welfare budgets, education and parenting policy.

Representation shapes policy. It was women MPs that campaigned for women to have equal pay and more recently pay transparency. There are numerous issues where women’s experience is needed to shape good policy and legislation.

Women make a massive contribution to the country with their paid and unpaid work, in 2014 “informal childcare” alone was valued at £321 billion by the Office of National Statistics. Women’s experience counts and our democratic and parliamentary systems need to be accessible and attractive to them.

So, if you know a woman who would make a good MP go to our website and #AskHerToStand, if you are a woman who might consider a career in politics at some point #SignUpToStand via 50:50, we are here to help women get elected and monitor their progress along the path to Parliament. Join 50:50 Parliament today!

Get involved and get tickets to Big Tent Festival here.

Let’s build a better democracy together!