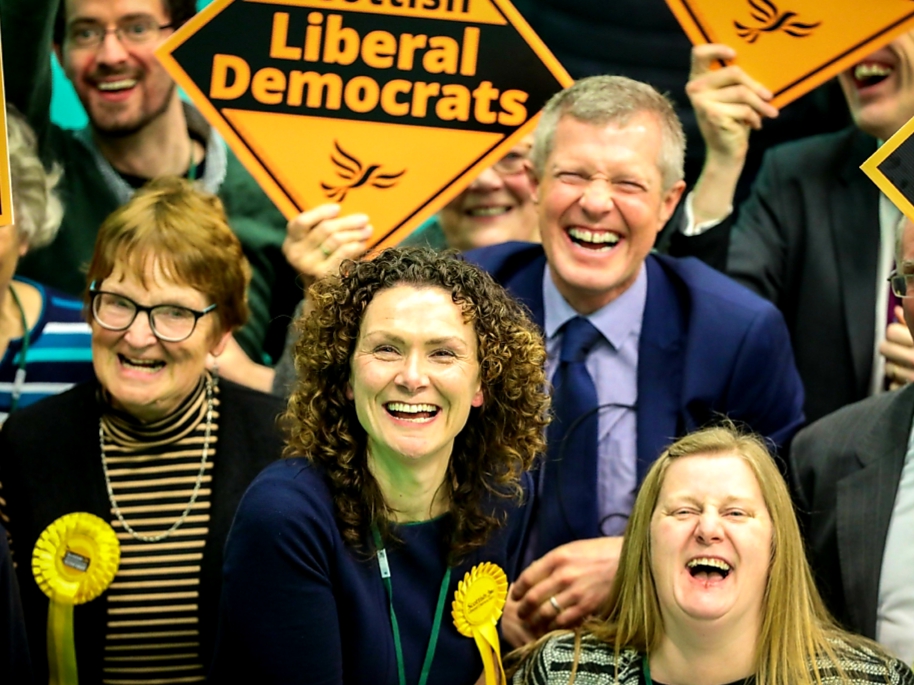 Wendy Chamberlain, is no. 1 on our list of 65 Lib Dem women who have reached out to 50:50 for support in their desire to stand as an MP.   She was one of the first to engage with the #SignUpToStand campaign in 2017.

Ex-police officer and mum of two, Wendy has just fought and successfully won the seat with a clear majority in what was in 2017 the skinniest of marginal seats when the SNP won by only 2 votes.

Not only did Wendy win by a very convincing majority she is also the first female MP in the seat, one previously held by the likes of Ming Campbell and Herbert Asquith who ironically wasn’t an advocate for women having the vote, “I am sometimes tempted to say there is nothing to be said for (or) against it”

Wendy is thrilled to have won in her first ever campaign and to now be part of a seven women Lib Dem team, and one of the 220 newly elected female MP’s.

She thanks her mentor and her support team including 50:50 and the Lib Dems Campaign for Gender Balance for helping her grow in confidence to achieve the successful candidacy.  She has carried her 50:50 bag throughout her canvassing which was referenced by the New Statesman in their article. She says:

“It’s not that women don’t have the ability its about the belief and the confidence and the network to achieve.  That’s what has helped me”.

To anyone who is considering standing Wendy offered, “I would ask, what’s stopping you?   The support networks are there, just reach out to them!”

And 50:50 are here to help women get selected and elected, so if you are a woman with political ambitions please do reach out to us by going on to #SignUpToStand.

As we face a possible 5 year period before the next election 50:50 will strive to grow our network, reach out to thousands more women who are in need of support as well as encourage our 50 candidates who didn’t make MP this time to keep going, become councillors, if they’re not already, and help us help other women by becoming a 50:50 buddy.

50:50 urges everyone to use our website to ask women to stand so that we can inspire them and support them along the path to Parliament. Help us build a better democracy that draws upon the widest possible pool of talent and experience including that of the 32 million women who live and work in the UK.

Record numbers of women have been going on to #SignUpToStand via the 50:50 website during this election. 50:50 are setting up the New Girls Network, a system of buddies to mentor and monitor women’s progress along the path to Parliament. We are creating personal profiles and providing guidance to each of these women.

50:50 Parliament will continue our work to encourage and inspire women to stand with our #AskHerToStand and #SignUpToStand campaigns. We will work with all the political parties to empower women into politics. Our #NewGirlsNetwork will support women to elected office so that women get better representation at the next election.

Read here: More than 50 women were inspired to stand by 50:50 Parliament #AskHerToStand & #SignUpToStand